Over Spring Break, while the rest of our staff and many of our students were working in New Orleans, I spent time visiting with former students in Tulsa and Little Rock. One of the rewarding things about campus ministry is seeing where your alumni wind up and the ways they find to serve the Kingdom of God. During that week, I got to visit with ministers, college professors, an architect, an attorney, a nurse, an accountant, a NCAA Div. I head coach, a software tech and Sergeant in the Army Reserve, a banker, a financial consultant, missionaries, and the Central/Eastern Europe director for Heifer International. These are men and women with whom I spent a lot of time during some of the most important years of their lives. Some came to Christ while at the UofA. Others developed spiritual values and maturity. I performed many of their weddings. And though our time together during their student years was relatively short, each of them (and hundreds of others) left a mark on my life.

The most unusual visit, ho 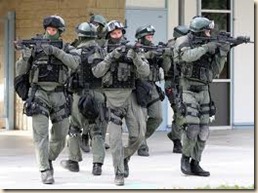 wever, was with a former student who is now the commander of the Little Rock SWAT unit. When Tim heard I was going to be in town, he invited me to go along as they served a warrant on a narcotics dealer. I was able to meet the team, sit in on their planning, ride along with them during the raid, get a “tour” of the home and drug stash once the scene was secure, and listen in on the debriefing after it was over.

I was reminded of an important lesson as I watched Tim lead his team – the importance of planning, preparation, and review even with something that you have done over and over again. Though the SWAT unit is trained for hostage and/or barricade situations, there are fortunately only a few of those a year. So they help the police force by securing scenes so that the narcotics officers can safely serve warrants and shut down narcotics operations. Last year, the SWAT unit served 220 narcotics warrants! Though they have done this type of thing hundreds of times, the time they took to plan and prepare was significant.

The lesson is even with something you have done hundreds of times, you need to make sure that you and your team are focused and prepared. Why? One reason for the SWAT unit is that they were entering into a potentially dangerous situation and they needed to be sure that everyone was sharp and focused. Though our leadership may not be in an arena that is physically dangerous, we should believe (especially in ministry) that every event, conversation, service, or study is spiritually significant. We need to be sharp, focused, and prepared for that.

Another reason for good preparation is that it prepares you to deal with the unknown. When the SWAT unit enters a situation, they don’t know exactly what will happen. How many people will be there? Will they have weapons? Will there be children? How will those being arrested react? Because of the exact preparation, the unit is better prepared to deal with any situation. They know which of their team is doing what. Who will be going where. They know where their people will be. That knowledge removes a lot of questions and uncertainty. Good preparation on our part makes us better able to be flexible and respond to the needs or opportunities that arise unexpectedly.

A final reason for focused preparation is that when you are doing something that you have done over and over again, it is easy to relax and not work as hard in preparation. When that happens, things get forgotten. Assignments get dropped. Problems develop. We need to approach even regularly occurring events with an attention to detail that won’t let us slide by with a half-effort.

Two side notes: 1) SWAT team members don’t eat donuts. They drink protein shakes. 2) The one question I never resolved was what is the appropriate thing to say to a handcuffed drug dealer who is laying on the ground as you step over him? “Excuse me?” “Nice house?” “Dude, you’re busted?”

One more baseball recording that I should have mentioned a couple of weeks ago: If you haven’t heard Garrison Keillor’s story “Babe Ruth Visits Lake Wobegon”, you need to. He is a gifted story teller and this story about Babe Ruth and the Lake Wobegon town team is classic.

I might be nearly a pacifist, but I've got a lot of respect for the guys who are willing to put their lives on the line on a daily basis to enforce the law.