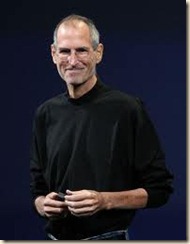 As most of the world knows by now, yesterday Steve Jobs retired as CEO of Apple – one of the most successful and innovative companies in US history. He was one of the co-founders of Apple in 1976 and what that company is today is a direct result of the vision and person of Steve Jobs.

I admit that I am (or was) a reluctant user of Apple products. I always fought the “hip” (which is pretty obvious if you know me as I have never been accused of being “hip) and superior image that Apple projected. Plus, most of the world and the tools I used were all PC-related. But I have had an iPhone for almost two years and love it. I have had an iPad since June and love it. And though I don’t ever see myself switching all the way to a Mac computer, my attitude toward Apple products has changed.

Steve Jobs has been an incredible leader and innovator. So, in light of his retirement, here are some quotes from Jobs that I think have some application to our leadership in whatever sphere we find ourselves – including ministry. Most of these quotes were gathered from a post by Casey Chan at Gizmodo.com and from the book The Steve Jobs Way, by Jay Elliot. (I drew from the review by David Mays. You need to check his website as he gives a summary of dozens of great books.)

On the importance of innovation:

"Nothing in companies is as blinding as a strategy, an approach, or a product line that has worked before. Success can be self-defeating, if it leads you into the rut of repeating yourself. Too often we cannot envision a different world because we've gotten into the habit of looking at our world with the mind-set of what has worked before."

"Innovators create products that are an outgrowth of what they imagine, things that help them create a world they would like to live in."

"Every team needs the spark of at least a few truly creative people who 'think different'--different enough to set an example for everyone else."

"We have always been shameless about stealing great ideas." PBS Documentary, Triumph of the Nerds, 1996

"It's really hard to design products by focus groups. A lot of times, people don't know what they want until you show it to them." BusinessWeek, 1998

"Apple should be the kind of place where anybody can walk in and share his ideas with the CEO."

On the importance of being focused as an organization:

Jobs pulled the plug on established, steady-selling products in order to focus on a few of the best. [Apple currently sells only 20 products.] He said, "I'm as proud of what we don't do as I am of what we do."

On the importance of passion:

"Great products only come from people who are passionate."

“You won't get people working for you fired up with enthusiasm unless you're fired up yourself . . . and you let everyone know it."

"The goal was never to beat the competition, or to make a lot of money; it was to do the greatest thing possible, or even a little greater."

“Being the richest man in the cemetery doesn't matter to me ... Going to bed at night saying we've done something wonderful... that's what matters to me.” The Wall Street Journal, 1993

"I want to put a ding in the universe."

When Steve Jobs recruited John Sculley, Exec VP of PepsiCo to be CEO, the clincher appeal was this: "Do you want to spend the rest of your life selling sugar water, or do you want a chance to change the world?"

I’ve used that last story many times in sermons. I think too often we in the Church have been content to run programs or keep people entertained rather than aim for changing the world. To do that, leaders need to lead. Be innovative. Be creative. Be focused. Don’t look at how we have always done things, but look for how we can do things better, with more excellence, and in ways that actually “produce” what we say want – men and women who have been transformed by God and who are working with Him to influence the world. Not just men and women who are addicted to a religious habit.

The IAAF World Track and Field Championships are just around the corner, running from August 27 – September 4 in Daegu, South Korea. We who follow track and field closely are excited about the event, though for most sports fans in the US it will slip by mostly unnoticed. After all, the Olympic Games are about the only track and field event to which most Americans pay attention. But the World Championships are as good – or better – meet. One reason is that it just focuses on track and field and not badminton, equestrian, and fifty other sports. Another reason is that the World Championships are, overall, a better competition. The qualifying standards in many events are more rigorous than the Olympic standards and more closely enforced. So the fields are often smaller and of higher quality.

In this year’s World Championships, there are at least six athletes competing with ties to the University of Arkansas. They are:

Here is some sundry information on the World Championships, as well as some links to other items of interest (at least to me).

More World Championship statistics than you could possibly care about

More opinions on Oscar Pistorius (the Blade Runner), the South African double amputee who has qualified to run the 400m in the World Championships. Now some scientists are saying that his prostheses may give him up to a 10 second advantage. It is hard not to cheer for someone who has overcome the obstacles that he has, but you also want to be sure the “playing field” stays level. You can read more about it here and here.

A few days ago I “attended” my first Global Leadership Summit – an event simulcast around the world to almost 180,000 people by the Willow Creek Association. I love these type of events, where you are exposed to leaders from a variety of fields who can stretch the way you think. There were twelve different speakers from the fields of ministry, education, business, politics, and psychology. They all did a great job and had valuable things to share. The quality of speakers made the two days worth the time and cost. Being a simulcast event, it didn’t have some of the elements of the Catalyst Conference (no live worship bands, no one being shot out of a cannon and you were in a comfortable room with 150 people instead of in an arena with 12,000).

So here are some of my favorite quotes from the Summit:

“If you can’t predict the future, create it.”

“You can’t think your way into an unknowable future, you must act.”

“Everyone is born an original, but sadly, most die as carbon copies.”

“The difference between a vision and a daydream is the audacity to act.”

“If your vision isn’t intimidating to you, there’s a good chance that it’s insulting to God.”

“God doesn’t give you the faith to finish what he calls you to; he gives faith to start it.”

In silence you leave the many to be with the One.

“When your maturity is not strong enough to change something, add external structure.”

“Humility is the noble choice to forgo your status and use your influence for the good of others.”

“When we live our lives connected to the Creator, we become part of the creative order – part of God’s tools of creativity…. We are called to create a world that reflects the character and nature of God.”

One of the realities of campus ministry is that it has its own rhythm and flow – it’s own schedule and pace. It usually comes down to four months of going full-throttle, a month to rest and re-organize, four more months of going full-throttle, and three months to do mission trips and discipleship projects, solidify support, rest and re-energize, and prepare to do it all over again.

But this time of year has it’s own feel. We are five days away from the start of my 30th fall semester with Christ on Campus at the University of Arkansas. The telltale signs of a new school year are all around:

* The football team is in the middle of two-a-days.

* The band is in the middle of two-a-days.

* Parents are moving their new freshmen into residence halls.

* Traffic is crazy. The mile and a half drive to Wal-Mart now takes 30 minutes.

* Road construction – the city always waits until August to do street repairs around the University.

* Freshmen girls are lined up in front of sorority houses while they go through Rush.

* International Student Orientation is gong on and our staff helps to provide transportation from the airport and hotels to permanent housing, banks, events, Wal-Mart, and other trips as needed.

* Older students returning from home, internships, study abroad, mission trips and projects and are excited to be reunited with friends they haven’t seen over the summer.

It all adds up to the most exciting time to be on campus. Worship services will be starting up this weekend. Small groups will be going next week. Events will be taking place to help new students make connections. Retreats and mission trips are on the calendar.

But I don’t know exactly what that looks like yet. I have learned over 29 years of doing this is that it is our role to plan and prepare and pray. But God has His own agenda and His own plans and we need to be ready to follow His leading. Many of the students whose lives will be changed this year we haven’t met yet. We don’t know where they are from or what they believe or don’t believe or how we will get involved in their lives.

And for most of them, the last thing they are expecting right now – as they are moving in and buying books – is that they are going to have an encounter with the Almighty God while at the University of Arkansas. But they will and they will never be the same.

So right now I plan and prepare, but mostly I pray. As has been my custom over the last several years, I will take pray walks around campus – often late at night. Won’t you join me in praying for Christ on Campus and for campus ministries around the US as the new school year starts? Pray that God will use us as His instruments for transforming the lives of university students, staff, and faculty and for furthering His purpose in our world.