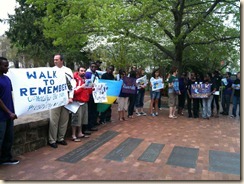 on our campus. As I silently walked around campus with the other participants, God spoke to me about the Church in the US – our lack of awareness of the needs of our world and the self-centered and inwardly-focused nature of most of our lives and faith.

… of the genocide in Rwanda – that within their lifetime (1994) and over a period of only 100 days, 800,000 to 1,000,000 people were brutally killed because of the tribe to which they belonged. That is the numerical equivalent to approximately three Sept. 11 attacks occurring every day for three months.

… that each year more than 2 million children worldwide are exploited in the global human sex trade? That 600,000 to 800,000 victims are annually trafficked across global borders? That 14,500 to 17,500 of those are trafficked into the US?

… that 27 million men, women, and children are held as slaves around the world?

… that there are conflicts going on not only in Libya, but the Sudan, the Ivory Coast, Palestine, and other parts of the world?

… that an average of 171,000 Christians are martyred for their faith each year?

My guess is that most Christians in the US are unaware and uninterested. We have other things to worry about. We have conferences and camps to plan and Bible studies to prepare. We have “family life centers” to build. Plus, the Razorback Red/White game is this weekend and it’s on ESPN! We don’t have time or an appetite to hear or think about those who are suffering or the injustice in our world. We don’t want a faith that is aware. We want one that is comfortable and that keeps us entertained. 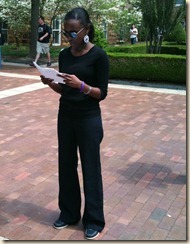 And, to be honest, I have often been the same way – wrapped up in my ministry and programs and plans. But thankfully God has placed students around me whose hearts and vision are often bigger than mine. He has given us Ines, a student in our ministry from Rwanda who spoke at today’s walk. She and the other Rwandan students on our campus are reminders that these aren’t just numbers, but people with families and hopes and dreams. God has given us a group of students who have a heart for those who are being trafficked and meet each week to pray and seek ways to raise awareness and funds to combat the problem.

It really isn’t my goal to make you feel guilty. (OK, maybe just a little bit guilty.) I really want to move you to action, to cause you to pay attention and look beyond yourself. We live in a world of hurting people. Some are close to you, but many aren’t. Yet they are people created in the image of God, many of whom are your Christian brothers and sisters. So read the paper with a prayerful attitude. Get a copy of Operation World and pray through it. And remember this words of Jesus:

Never heard of Operation World-sounds interesting. Thanks for the suggestion!