I wanted to make one final post regarding the 2012 Olympic Trials, which ended last Sunday. Once again, it was a great meet with so many outstanding performances that it is hard to choose the highlights. Last week, I hit some of them from the first four days of competition. Now that the dust has settled, here is what stands out to me from the 2012 Trials …

l at this year’s Trials. I was blessed to have a great group of officials to work with in Eugene.  They demonstrated professionalism and a willingness to work together to give every athlete the opportunity to perform to the best of their abilities and pursue their dreams made each of our events run smoothly, even though we had to deal with rain at each one. They made my job an easy one.

Olympic Standards – I don’t remember near as much concern about the Olympic “A” standard as we had this year. At this year’s Trials, the “A” standard (or lack of it) was conspicuous. In each of the men’s and women’s high jumps, only four athletes entered the Trials with an Olympic “A” standard. And, in each case, one of those athletes didn’t make the finals. Which means that the three who had that standard were the only ones eligible to go to London unless someone new cleared the height on that day. Though we have plenty of qualifiers in the sprints and hurdles, that’s not the case in many events. There were multiple athletes who came through with clutch “A” performances at the Trials. If you look at the US team going to London, you will notice that we aren’t sending full squads in any of the race walks, either triple jump (only one qualifier for the women), the men’s hammer, or the decathlon. (You can see the squads, minus the relay pools, here. Because of standards, not all qualifiers finished in the top three. For example, in the men's javelin, neither the first or second place finisher at the Trials is going to London, but place 3-5. In the women's 10,000 meters, Trial finishers 1, 4, and 7 make up the Olympic team.) All this seems to point to a decreasing depth among track and field athletes in the US, even though track and field is the top participation sport for high school girls and number two for boys. We are losing more and more of our top athletes to other sports because the generate more recognition, more scholarships, and more lucrative careers.

Clutch Performances – One of the most exciting parts of the 2012 Trials were the clutch performances by so many of them to not only make the team, but achieve the needed standard. There are too many to mention, but time and time again – from the men’s 10,000 meters on the first day to the women’s long jump on the last day – athlete after athlete came up with the performance of their lives to punch their ticket to London. 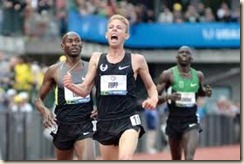 rom his high school days, Rupp has been the great hope of American distance running. And he has lived up to that. I remember watching him at the 2009 NCAA Championships, stopping during the 5,000 meter final to put his shoe back on and then still decisively beating the rest of the field. At this year’s Trials, he won both the 5,000 and 10,000 meter races. In the 5,000, he beat Bernard Lagat (who finished second at last year’s World Championships) for the first time in thirteen races and broke Steve Prefontaine’s Olympic Trials record, which has stood since 1972.

Women’s High Jump – This year’s women’s high jump was special. First of all, there were great performances by both Chaunte Lowe and Brigetta Barrett. Both cleared 6’ 7”, which for Barrett was a two inch personal best. If they jump that way in London, both could vie for medals. Another reason was the excitement generated for the event. Much of that came from Chaunte, her “showmanship” and her efforts to involve the crowd. But all the athletes benefitted from it. 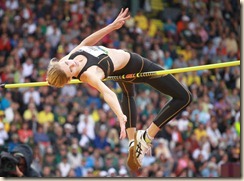 Finally, it was special because it featured the past, present, and future of the event. Chaunte and Brigetta are in their primes (or entering their primes). But there was also Amy Acuff, making her fifth Olympic team. She will be 37 by the time the London Games start. And then there was 15-year-old Gabby Williams. She was too young to participate in the USATF Junior Championships earlier this summer, so she came to the Trials. She finished fifth, jumping 6’ 2.25”. In doing so, she tied the 21-year-old national record for high school sophomores – a record owned by Amy Acuff.

Razorback Olympians – It is always exciting to see some of the Razorback athletes make the US Team. On this year’s US squad will be Tyson Gay, Wallace Spearmon, Jr., and Jeremy Scott. Of course, there will also be Razorbacks on other squads: Marek Niit (Estonia), Alistair Craig (Ireland), Raymond Higgs (Bahamas), Veronica Campbell-Brown (Jamaica), Regina George (Nigeria), and Tina Sutej (Slovenia). There are probably others that I’m missing.

The Dead Heat – We may never know the whole story and there are plenty of conspiracy theories. 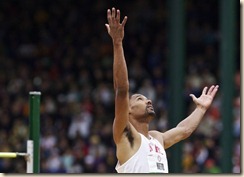 The Agony and the Ecstasy – The drama of the Trials are what make them so compelling. There is the ecstasy: Jamie Nieto winning the high jump after not getting to go four years ago because of no “A” standard, Dathan Ritzenheim placing third and hitting the standard in the men’s 10,000 after placing fourth a few weeks ago in the marathon Trials, Brittany Borman winning and PRing with an “A” standard in the javelin on her last throw, Lance Brooks doing the same thin 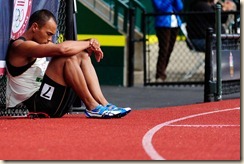 g in the discus, Chelsea Hayes PRing by over a foot in the women’s long jump. The list could go on and on. But there is also the agony: Bryan Clay realizing his quest to be the first man to medal in the Decathlon in three Olympics had come to an end, Julia Lucas struggling down the stretch in the 5,000 meters only to lose the last spot by .04 seconds, and all the others who spent that last four years preparing for this chance only to see their dreams not come true.
Posted by Mike at 7/08/2012 04:54:00 PM