“New” Images From the Camera of Gordon Parks 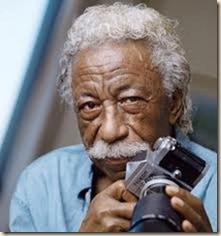 To many who are my age and younger, the name of Gordon Parks is unfamiliar. And that is to their loss. Gordon Parks (who died in 2006 at the age of 93) was an African-American pioneer in many ways: the first to be a photographer for Life Magazine, the first to produce a major Hollywood film, a writer, a musician, and a participant in the Civil Rights struggles that our nation went through fifty years ago.

He was also born and raised (until his mother died when he was fifteen) in my hometown of Fort Scott, KS. 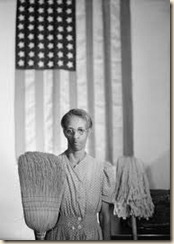 Probably his most famous photograph, shot in 1942, is entitled “American Gothic: Washington, D.C.”

Parks came to mind this week when I saw an article in the New York Times that reported seventy never-before seen pictures of his had been discovered. They were from an assignment he had from Life Magazine in 1956 that depicted life in South for African-American families in the era of Jim Crew segregation. Though you might expect the photos to be provocative, they aren’t. But they are beautiful and moving in their simplicity, which makes them even more powerful. Here is another New York Times article on Parks from earlier this year.

If you are not familiar with Gordon Parks, take some time to get to know his life and his work. His work is incredible and his contributions to our nation are important. Your day will be richer for spending some time learning more about this man.

Below are a list of links that can give you more information.