The UofA–A Spiritual Heritage Unlike Any Other

For golf fans, this week is Masters’ Week – the first of the four major golf events of 2012. And golf fans will recognize the tagline for the Masters’ broadcasts: “A tradition unlike any other.” And that is true. The beauty and history of the event makes it completely unique. 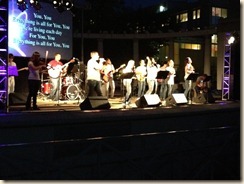 I thought of that line this week in a totally different context. Last Wednesday was 4.4.12. Not just the date, but a campus-wide unified worship event. After four months of planning by students and staff from several different Christian organizations on our campus, over a thousand people gathered on a beautiful night in the Greek Theater. We were led in two hours of worship by a band of about fifteen folks from several different ministries. Throughout the night, students shared stories via video of how God had changed their lives while at the UofA. Money was given to help out the Samaritan Center, which provides food to hungry schoolchildren in Northwest Arkansas.

It was a great night. It was the result of lots of people following God’s leading and sacrificing their agendas for His glory. But it was also a night built upon a heritage of which very few of the students who gathered on 4.4.12 are aware – a heritage that began in the spring of 1996.

In 1996, religious life on the UofA campus was pretty much like it is every where else in the Bible Belt – lots of Christian groups each doing their own thing without any regard for the other groups on campus. Most of us didn’t know the other Christian staff on campus. To be honest, they were often viewed more as competitors than colleagues. Most of us were more focused on building our group than on the Kingdom of God as a whole.

But a group of students from a few of the ministries on campus began to pray together. They quietly recruited others to come and pray with them. And the group began to grow. There was no staff involvement. Just students who felt a calling from God to do something.

That prayer movement by students culminated in a couple of things. 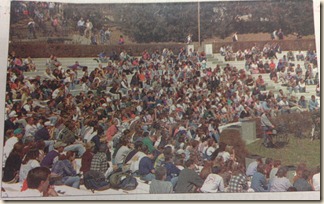 One was an event on April 1, 1996 called “Light on the Hill.” On a sunny Monday afternoon, between 2,000-3,000 folks gathered in the Greek Theater for a time of worship and prayer. And then that evening, a crowd of about twice that size gathered in Barnhill Arena for more worship and prayer. Both gatherings featured Bill Bright, the founder of Campus Crusade for Christ and one of the most influential Christian leaders of the last half of the 20th century. They also featured Twila Paris, a Christian singer and songwriter who lived in this area.

The other thing that began as a result of that student movement was a weekly prayer gathering of campus ministry staff. When Bill Bright arrived on campus for Light on the Hill, he called together many of the campus ministries at the UofA. He gave us two pieces of advice: First, stay out of the way of the students leading this prayer movement. If we tried to step in and lead it, we would just mess it up. And, second, start meeting together to pray in support of what our students were doing.

So we did that. And we have continued to do that ever since. For the past sixteen years, a group gathers each week during the school year to pray for one another, our families, our campus, our ministries, and our world. Depending on schedules, sometimes there will be a half dozen folks and sometimes there will be almost thirty. Gone is the sense of competition. In its place are hearts that desire to see God’s Kingdom expand through His work in all of our ministries. We don’t do things in the same ways and you wouldn’t have to look very far to find areas of theology in which we disagree. But we share common commitments to Jesus Christ, to making Him known, to the Word of God, and to one another.

These years of consistent prayer have built a unique spiritual atmosphere on our campus. There is a sense of unity. We rejoice with each other. And we weep with each other. Some of my best friends in Arkansas, and some of the people I most trust spiritually anywhere, are other campus ministers at the UofA. We’ve prayed for each other and our families and our ministries and our campus on a regular basis for almost two decades. That may be why we find such longevity among campus ministers at the University of Arkansas. Warren has been here almost thirty-five years. I’ve been here thirty. Lynn has been here over twenty-five. Ronnie over twenty. Kevin almost twenty.

There is a spiritual heritage at the University of Arkansas of which the administration is probably unaware. It began with a group of students back in 1996. It was the foundation on which the 4.4.12 event on Wednesday was built. And it, along with this current generation of students and campus ministry staff, will continue to make the UofA a unique place – a place where God moves, calls people to Himself, and raises up leaders from around the world who will seek first His Kingdom.