The Royals, Me, and God–Revisited.

Today is the REAL Opening Day of the Major League Baseball season. (Sorry, Jim, but I don’t think those two games in Japan last week between the Mariners and A’s should really count as the season openers.) Those who know me know that I believe this should be a national holiday. Businesses and schools should be closed. Everyone should attend a ballgame or watch one on TV! But, alas, that will not be. 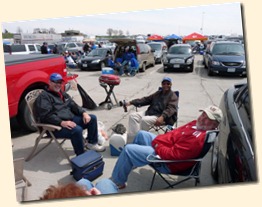 For the past few years, three of my best friends from high school and I have tailgated and attended the Royals’ home opener. We’ve done this with hearts confident that this will be the year the Royals finally make it back to the playoffs! We’ve endured nasty weather and the embarrassing “Baked Bean Incident of 2011.” Unfortunately, a scheduling conflict will keep me from being there on April 13 this year.

* The pace of the game. There is no clock. The game will take as long as it will take, so relax and enjoy it!

* The intricacies of the game. Moving the outfield. Setting up pitches. Sacrifices. I could go on and on.

* The history of the game. In no other sport are the heroes of past years and their statistics and accomplishments so well known.

* The generational nature of the game. Parents taking their kids. (My girls had great times at Razorback baseball games when there was still grass we along the foul lines for blankets and room for them to roam. Now the Razorbacks are so popular, it’s all bleachers and luxury boxes.) Playing catch. “Eating for the cycle” (which my oldest daughter did last night at a college game in Omaha.)

So take some time today to watch a game today. Or maybe even better, listen to one on the radio or internet. I really believe it is the most enjoyable of the sports to listen to.

Below is a baseball-themed "re-post" from a few years ago. Sometimes I need to be reminded of this. Maybe you do, too.

I'm a Kansas City Royals fan. There. I admitted it. I have been since they played their first game in 1969. There really isn't much reason to be a Royals fan now-a-days. Especially in Arkansas. This is Cardinal country. It's easy to be a Cardinal fan. They spend a lot of money. Have a lot of good players. They win. They are easy to love.

But it's not easy to be a Royals fan. They haven't won anything since about 1985. They have lost 8 of their last 10 games. (They didn't lose tonight! But then, they had the night off.) They have more losses than any other major league team. I probably couldn't name five players on their roster. The Royals aren't an easy team to love.

But I'm a Royals fan. This summer I'll probably head to Kansas City and watch them play (and probably lose) a couple of games.

Sometimes I'm sure God thinks of me like the Royals. I'm not always easy to love. I can put on a good show sometimes. But you don't have to watch too long before my failures begin to show. I am often self-centered. I'm impatient. I'm not loving. Not pious. Not zealous. Distracted. The list could go on. I'm not an easy person to love. But God is a Mike Armstrong fan. He loves me in spite of my inconsistencies and failures and sin.

"This is how God showed his love among us: He sent his one and only Son into the world that we might live through him. This is love: not that we loved God, but that he loved us and sent his Son as an atoning sacrifice for our sins."

"For I am convinced that neither death nor life, neither angels nor demons, neither the present nor the future, nor any powers, neither height nor depth, nor anything else in all creation, will be able to separate us from the love of God that is in Christ Jesus our Lord."

Nice piece, Mike. Opening Day will not be the same w/o you! Take care.