I was saddened to re 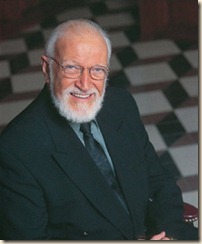 ad of the death of Calvin Miller, who passed away Sunday at the age of 75. I’m sure there are many who read this who aren’t familiar with Miller. Dr. Miller grew up in Enid, OK and served as a pastor in Nebraska for thirty years and a seminary professor for twenty years after that. But he was probably best known as the author of over forty books.

Calvin Miller was an amazingly talented man. He wrote everything from children’s books to poetry to fiction to books that are used as textbooks in seminaries. He was also an artist. And he was a very gifted preacher and teacher – funny and engaging and insightful and moving. Many of his books and sermons were formative in my development as a Christian and a minister.

But they were all from afar until I had the chance to spend some time with him a few years ago. I invited Calvin to speak at our annual campus ministers’ retreat in Indiana. When he arrived, I was not sure what to expect from him. We had some very good speakers and writers at the retreat who weren’t “people” people and didn’t personally engage with those at the retreat. But from the time I picked Miller up at the airport, I knew that he wasn’t like that. We spent time driving the hour back and forth from the airport. We went to dinner. I discovered that Calvin Miller was personable and engaging and interested in every person he met. For the next two or three years after the retreat in Indiana, I received Christmas cards from him that featured a print of one of his paintings.

While in seminary, Deron Spoo served as Dr. Miller’s research assistant. In his tribute to Miller, Spoo writes:

“How can one person possess the gifts necessary to communicate to children, convict adults, and creatively communicate mysticism? Calvin embodied the gifts of Seuss, Milton and Brother Lawrence. But Calvin was much more than the sum of these parts. Calvin was a Christ-follower first and foremost.”

Finally, some of Calvin Miller’s own words from his memoir, Life Is Mostly Edges:

The edge is a good address. It is a good place to remember our temporariness. It teaches us to spend our time wisely. So our last days can become our best days.

Life is good. So is God.

And life with God is full of glorious daybreaks. After all, it was God who gave me the courage to walk the edges of a life that was never mine!

You can read more about Calvin Miller here.